The Secrets Of Krimml Waterfalls 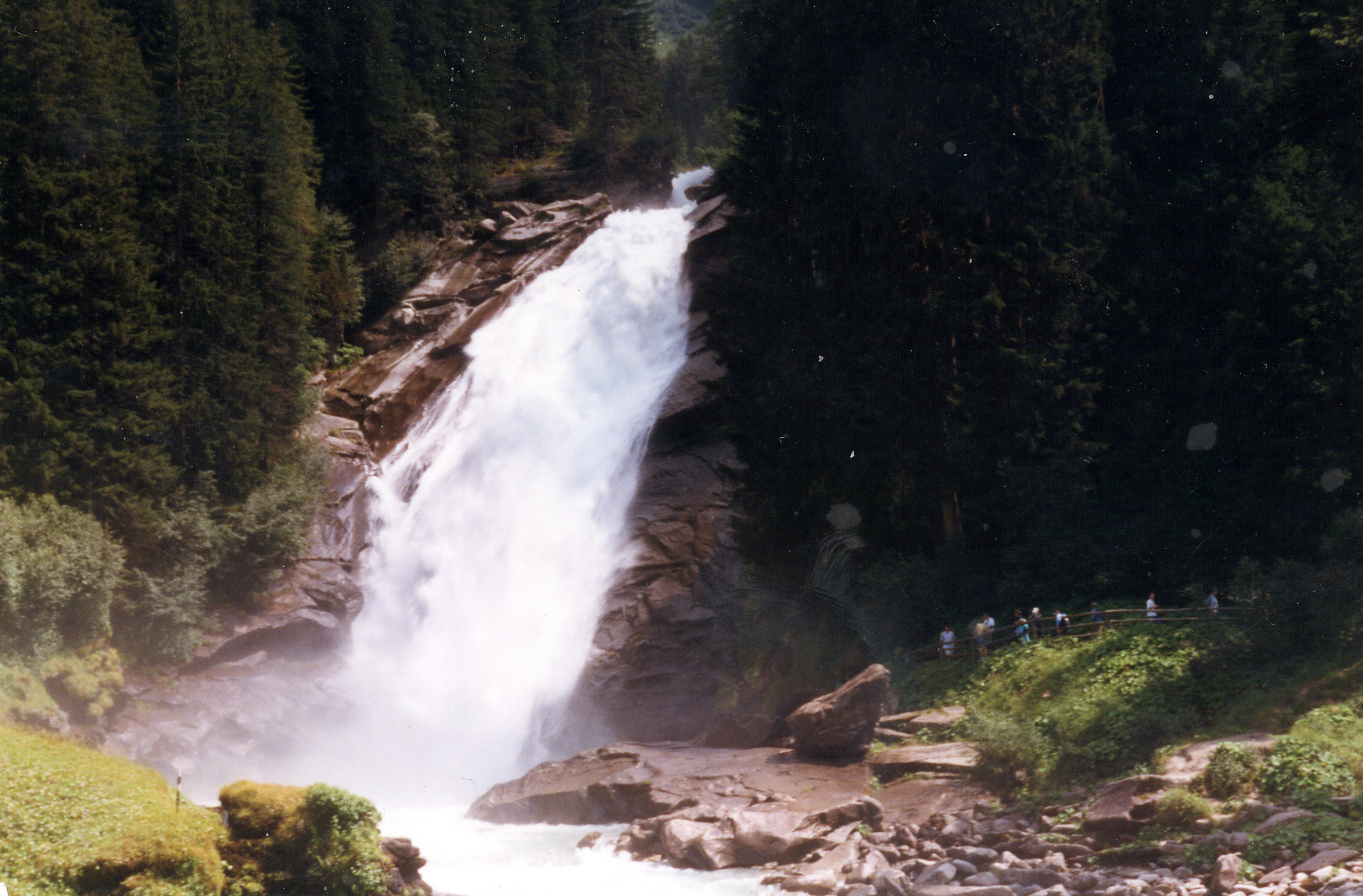 The number of natural attractions in Rauris Valley and the surrounding area is barely quantifiable, but if I needed to highlight a few, then I would stress out the many waterfalls that you can visit during your trip here. The most spectacular and justly famous of these is the Krimml Waterfalls, which is Europe’s tallest waterfall and ranks fifth in the world. 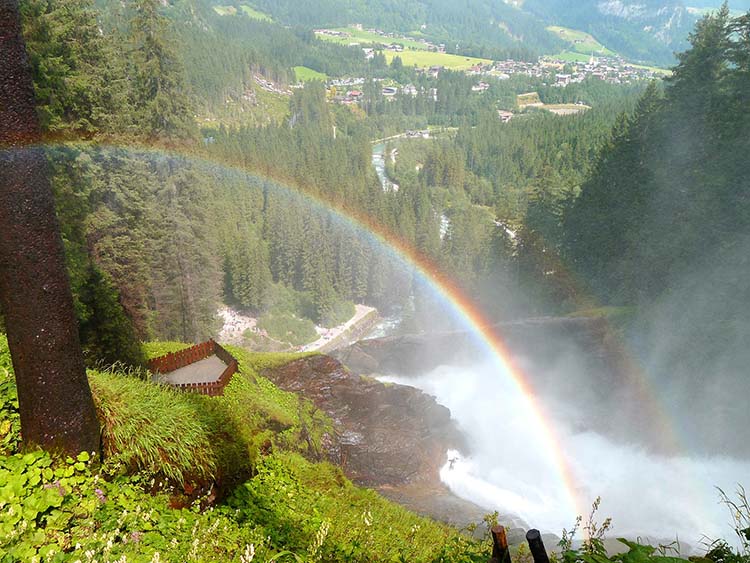 Before I tell you about one of the strangest experiences of my life, let me introduce you to this Alpine jewel, which, though we can read a lot about in many sources, can only be understood by its true beauty and grandeur, if we literally stand in front of it.

Krimml belongs to the Province of Salzburg and it is situated merely 75 km from Hotel Sonnhof. The nearest large town is Innsbruck, where you can also visit many tourist attractions, but I will tell you about those some other time. The fun starts in the huge parking lot east of the entrance to Gerlospass, the toll paying mountain road on the outskirts of Krimml.

I call it fun because you can access the waterfall with your group of friends or with your family. It is important to note that hiking is best recommended for families in the summer, as the terrain is difficult during winter and the benches in the rest areas are difficult to use due to the snow cover.

The fairy-tale like path leading to the waterfall is winding and there are plenty of opportunities to capture our favourite scenes on camera, as there are lots of rest areas along the way which offer the most beautiful panoramas and from where the tired traveller can admire the spectacular views.

The real sight starts of course when we first see the Krimml Waterfalls. It is very difficult to describe the impression that comes over you once you see it, accompanied by the rumbling of the falling water and the droplets from the spray of the waterfalls, which you cannot escape. Often, the appearance of multiple rainbows also adds to the beauty of the sight.

In fact, the waterfall consists of three waterfalls, falling in three stages from a height of 380 meters. The tallest one has a drop of 145 meters, then the middle one drops 100 meters, while the lower waterfall drops in two-steps from nearly 140 meters, stunning nearly 350 thousand visitors a year.

You can also approach the top of the waterfall, but the staff at the Hohe Tauern National Park strictly recommended children against it. Everything changes from the top, and the view is indeed breathtaking, as you are now almost 1,700 meters high, and it is at this altitude where the most beautiful alpine wildlife is revealed.

Experts at the Hohe Tauern National Park recommend that only experienced hikers approach the waterfall during the winter, not to mention the top of the waterfall. But anyone who feels that they can take on such an adventure will, with some luck, be in for the most beautiful sight of their lives. I’m writing with a bit of luck, as you certainly need some luck to be able to witness one of the most interesting phenomena in the Alps. 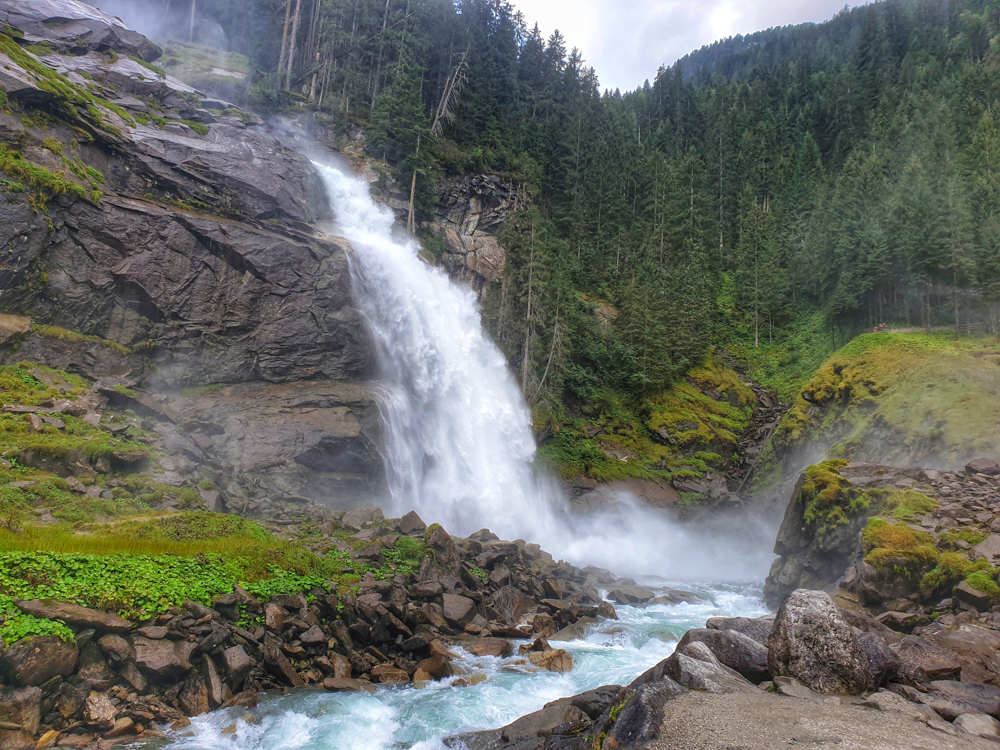 At 1,700 meters high, in winter, the waterfall will always surprise the curious visitor, because at this altitude the water vapors freeze on both the nearby rocks and vegetation, turning it into a winter wonderland.

What I had the chance to witness happens really quite rarely and that is the reason why I thought I would definitely share this experience with visitors to Sonnhof Hotel and the tourists from Rauris.

It was in winter when we decided with a few friends that we would not miss this great attraction. The small winding path and the lookout points awaited us in a whole new robe, compared to what we had seen in the summer pictures. A real winter wonderland revealed itself in front of our eyes. What we saw at the waterfall, however, is unlike anything I had experienced or seen in my life before. As I mentioned before, it is a very rare phenomenon, but we were lucky enough to see Europe’s tallest waterfall completely frozen! We were greeted by a 380 meter high ice cathedral! The sight completely overwhelmed us all to such an extent that we could not speak for long. Only the cracking of the ice tower and the roar of the ice giant disturbed the silence around us every now and then.

I knew right then that this was the experience I would be telling about first, each time I would be asked to talk about my travels. For those who aren’t scared of some frosty, snowy hiking, I can only recommend the Krimml Waterfalls in winter. Even if you are not as lucky as we were, the road leading to it and the snow-white landscape surrounding the waterfall will be stunning.

We are happy to inform you that the 3G rules for travelling to Austria have been dropped, so there are no more epidemiological controls at the borders.

We look forward to welcoming you!